Boris Johnson was certainly right when he said on Easter Sunday that the NHS was “powered by love”.

The Prime Minister spoke movingly as he thanked the doctors and nurses who cared for him after he was struck down with coronavirus and “things could have gone either way”.

So many of us – from all political parties and none – prayed for the recovery of the former London Mayor after his condition worsened and he was transferred to the intensive care unit in St Thomas’ Hospital in London.

Now Johnson is out and convalescing. Upon leaving hospital he put in context the steadfast dedication of the NHS staff who he said were “watching and thinking and caring” for him when he was so badly in need.

The best way the Prime Minister and his Cabinet colleagues can show they truly value the incredible lengths our NHS workers are going to in the fight against this deadly virus is to ensure everyone who needs it has access to the correct Personal Protective Equipment (PPE) and testing facilities. The Government must end the delay and prevarication in providing what is necessary to minimise the risks being taken by our hospital and clinical staff each day.

The failure to have delivered on these two points is shameful – and saying so is nothing to do with party politics. It is a matter of fact. And, for those workers on the frontline, it is a matter of life and death.

Much of the media has focused on the two nurses Boris Johnson chose to specifically highlight in his speech, describing movingly how they watched and monitored him for 12 hours straight whilst he was at his weakest. Perhaps it has been less widely recognised that both these carers are immigrants to the UK – Jenny is from New Zealand and Luis is from Portugal.

If the NHS is powered by love – a notion with which few would disagree – then that care and compassion comes flooding in from all four corners of the globe through the more than 100 different nationalities who are represented in our wonderful health service. Over 13% of NHS staff are from outside the UK, including over 25% of doctors.

That’s why I want to see Johnson’s government now offer unconditional British citizenship to all non-British workers in the NHS, from porters to paediatricians, from care assistants to trust chief executives.

Yesterday I opened a petition on change.org calling on ministers to make this change immediately and provide a new level of security and stability for all non-British workers in the NHS.

For me, this is not just a political or policy matter – it is a deeply personal one. Just as the staff of NHS in London saved the life of the PM – so they also saved my life nearly 20 years ago when I was a young refugee. I had been shot after leading an anti-gangs campaign in my local neighbourhood and the NHS was there for me, allowing me to rebuild my health and my life.

For almost a decade now, the debate around immigration has been unpleasant and uncomfortable. At its worst, it has veered into toxic racism and caused huge divisions in our country. Brexit felt, for some, like a sign that the British population were rejecting many of us who had come and built a home here. Sometimes our contribution – to the economy, the creative industries, to the health of the nation – seemed like it was being ignored. Too many of the jobs we now see as vital, from caring for the elderly to picking fruit and working in distribution centres, which are heavily populated with non-British workers, have been dismissed as “unskilled”. Those workers, including nurses like Luis who cared for Boris Johnson, were told they wouldn’t be welcome in the new immigration system that would be established once we left the EU.

But now the chips are down and our country faces a crisis like no other in its history. For generations to come, we will be talking about the heroes who risked their lives every day to try to keep more of us safe. These are the doctors in intensive care units, nurses in A&E, porters ensuring vital equipment is in place, cleaners stopping the spread of the virus, pharmacists handing out medication, and many, many more. They all deserve our gratitude. The very least the Government can now do for those who have not just chosen Britain as their home, but also chosen to put their lives on the line at this moment of unprecedented tumult, is to give them citizenship. They are not just British. They are the best of British. 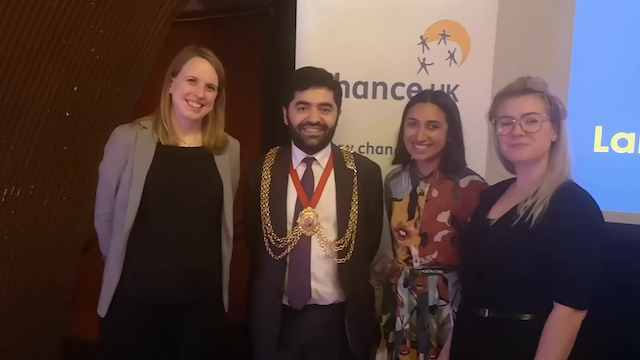 Hello! And thank you, It is such a pleasure to join with you and share the success of Chance UK.…