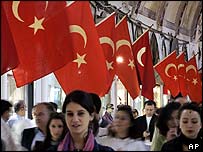 The Turkish community in the UK has welcomed the announcement of a date for the beginning of Turkey’s membership talks with the EU.

Many believe that joining the Union would put an end to persecution of the Kurdish minority, and improve Turkey’s human rights record in general.

But others voiced concerns that even meeting all the EU’s tough conditions might not grant access to the “club”.

Opposition from large member countries is widely seen as the major hurdle.

Alp Ceylan, a Turkish citizen who has been living in the UK for the last seven years, told BBC News the whole community is looking forward to joining the EU – provided they are granted full-fledged membership.

“The conditions are very difficult to fulfil,” he said.

“If we meet all conditions regarding the Kurdish problem, the Cyprus problem, economic issues and so on – I ‘m wondering whether we are eventually going to be in Europe.”

Turkish people are and feel European, he said, despite opposition from some EU members.

Many of the 100,000-strong members of Britain’s Turkish community are Kurds that fled persecution in their home towns.

For them, Turkey’s EU membership is probably the easiest path towards democracy and equality.

Ibrahim Dogus, 24, is the chairman of the Turkish-Kurdish community centre Halevi in London and the son of a Kurdish refugee.

He said Turkey had become more tolerant towards its Kurdish citizens.

“It’s going to help a lot on the ground for people to feel Turkey is evolving into a democratic state which respects the law,” he said.

But for Ishell Alliyon, 34, who fled from Turkey 10 years ago, much still needs to be done to end discrimination against Kurds.

“If Turkey wants to be a European country, it has to recognise the colour of our country,” she said.

“Kurds are nearly a third of the population – it’s not something they can deny.

“We want freedom of expression, education in our mother tongue.”

Special attention should be given to women’s rights in general, she said.

Honour killings are still taking place, and until recently, unmarried couples living together were breaking the law.

But one UK-based Turk cast doubt on the benefits of EU membership.

“They think the EU is democratic and will bring democracy to Turkey,” she said.

“Of course they may be disappointed.”

https://www.nbcnews.com/news/world/turkey-enters-new-era-same-strongman-after-erdogan-election-triumph-n886261 “A very powerful individual, accused of being more and more authoritarian, has extended his powers,” one expert said. June…

END_OF_DOCUMENT_TOKEN_TO_BE_REPLACED 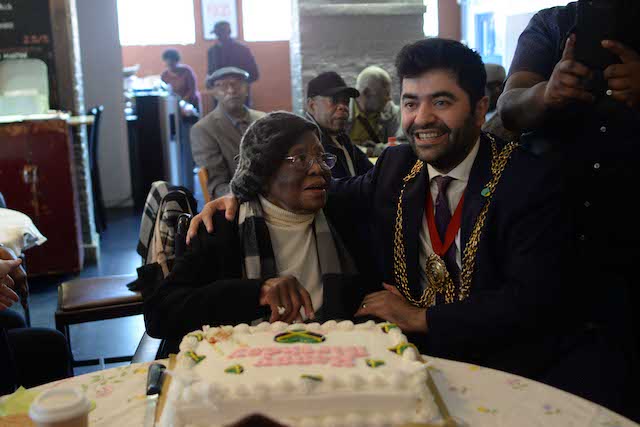 Ladies and gentlemen, friends, My name is Ibrahim Dogus, Mayor of Lambeth, and what an honour, it is to be…